by Editor
in General

This week, the Presidential Office held a special meeting with individuals from various organisations that are invested in the growth and support of local entrepreneurs and businesses to discuss what is needed to eliminate the red tape obstructing the growth of small and medium enterprises.

President Cyril Ramaphosa said, “With regards to the South African Startup Act, I would like us to consider that… If we are serious about promoting entrepreneurship, we need to think about how we boost startup activity.”

Matsi Modise, founder of and investor in Furaha Afrika Holdings, Vice-Chairperson of SiMODiSA, and Chairperson of the SA Startup Act Steering Committee, indicated to the President that there is no better time than now for South Africa to re-position itself as a gateway for high impact, high growth technology entrepreneurship on the continent.

She stated that South Africa is losing a lot of talented entrepreneurs due to outdated and a disabling policy framework. 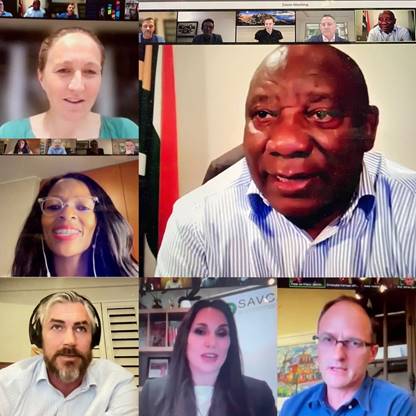 Representatives from the SA Startup Act Steering Committee were invited to attend the session to discuss policies and proposals needed to enact change in entrepreneurial growth. During the course of the conversation, several key challenges emerged as common themes.

These included administrative complexity, labour regulations, a critical funding gap and lack of affordable finance, as well as the inability to access finance due to lack of formalisation, proven track record and collateral or adverse credit history.

Mention was also made of there being an over-emphasis on general enterprise support rather than sector-specific support and market linkages.

Tanya van Lill, SAVCA CEO said, “Our venture capital fund managers get a lot of criticism that they don’t invest in enough businesses or entrepreneurs, but the fact is that there just aren’t enough VC fund managers in South Africa with big enough funds to make the investments that are needed and to invest in the vast number of entrepreneurs that are looking for funding.

One of the biggest challenges they cite, is that they battle to fundraise themselves – so even the Venture Capital industry battles to fundraise.

Currently, investors into Venture Capital fund managers are high net worth individuals, family offices and some corporates together with the SA SME fund which has played a pivotal role as an institutional investor in the VC industry. There is, however, hardly any other institutional capital flowing into the VC industry at the moment.”

Interventions were proposed for creating an enabling regulatory environment, deploying finance and incentives, establishing a level playing field and developing a digital intervention programme for SA.

A common theme that emerged from the meeting was the need to foster a vibrant ecosystem for startups. This requires addressing systemic constraints and regulatory barriers, in addition to direct enterprise support and funding.

On this last point, it was discussed that new and innovative models of financing be developed, including outcomes funding and early-stage funding.

Attendees reached the consensus that South Africa needs to establish itself as a hub for venture capital and a gateway to the continent.

It was also agreed that a partnership approach would be crucial for strengthening linkages between government and organisations in the sector and for developing solutions collaboratively.

Other crucial enablers that were explored included developing skills in digital and tech, addressing late payment of SMMEs through a mechanism for purchase order financing, and tackling other causes of business failure.

“There are four key policy amendments that we propose for qualifying startups that will drive around 80% of the change.

These include tax breaks and incentives for investors to ensure SA’s tax regime makes us attractive for foreign VC investors relative to the best startup locations globally, automatic BBEEE level 1 status, increasing access to skilled talent by allowing a small number of visas for highly skilled foreign nationals per startup each year, and automatic exchange control approval for IP transfer as well as amnesty from current and future exchange control regulatory actions for investments into qualifying startups.

The exciting part is that it’s possible to implement these in the very short term and the upside is big – both for employment creation and gains to the fiscus.”

Former Wesgro CEO and Digital Collective Africa Board Member, Tim Harris added, “There is an urgency to implementing these proposals now because South Africa’s tech leadership on the African continent is under threat, even as the world is waking up to the potential in the market.

I was in Europe last week with a group of young African tech entrepreneurs, and it was clear that momentum is shifting to Kenya and Nigeria. We are losing our competitiveness on the continent.

“But we still have the deepest capital markets in Africa, so we need to reinstate the 12J tax system to crowd this capital into venture capital and get our entrepreneurs funded.

Additionally, we still have the opportunity to attract skills to SA because talented people on the continent and around the world still want to come here, so we need to liberalise immigration to make sure the best and the brightest people move here to power our tech sector.


Lastly, our institutional and infrastructure base remains the strongest on the continent which means we can attract, nurture and grow IP-driven companies in the tech sector.

Unfortunately, our Apartheid-era exchange controls seriously limit the incentive to do this, and instead incentivise SA startups to incorporate elsewhere because IP is considered a form of capital, and is therefore constrained by our IP regulations. We really need to abolish exchange controls to signal that SA is open for business.”