As Celebrities participate in gaming showdown

by Editor
in Partner

That was the reaction that greeted fans and customers alike when LG Electronics organized its first Online Celebrity Gaming tournament in Nigeria.

Since its commercial inception in the 1950s as a technological oddity at a science fair, gaming has evolved into one of the most common forms of entertainment on the planet.

What started as an outdoor or out-of-home playable activity through large boxes on arcade systems soon became small boxes that every household could have and enjoy in the comfort of their own home.

The golden age of gaming between 1990 and 2000, brought in new audiences who were interested in the growing technological innovation. This also created a huge market for all players in the industry including television manufacturers.

Over the last decade, LG Electronics has produced some of the award-winning TVs that gamers across the world have come to love. Its art-inspired OLED models and expanded 8K lineup provide outstanding picture and sound quality for a viewing experience second to none.

To give its teeming customers experience of its new range of new generation of TVs, the company recently held an OLED TV Online Celebrity Gaming Showdown featuring two celebrity super stars – VJ Adams (Mc/Host/Dj/Gamer) and Praiz (Musician/Gamer) squaring up against each other on FIFA 21 and Mortal Kombat Games. 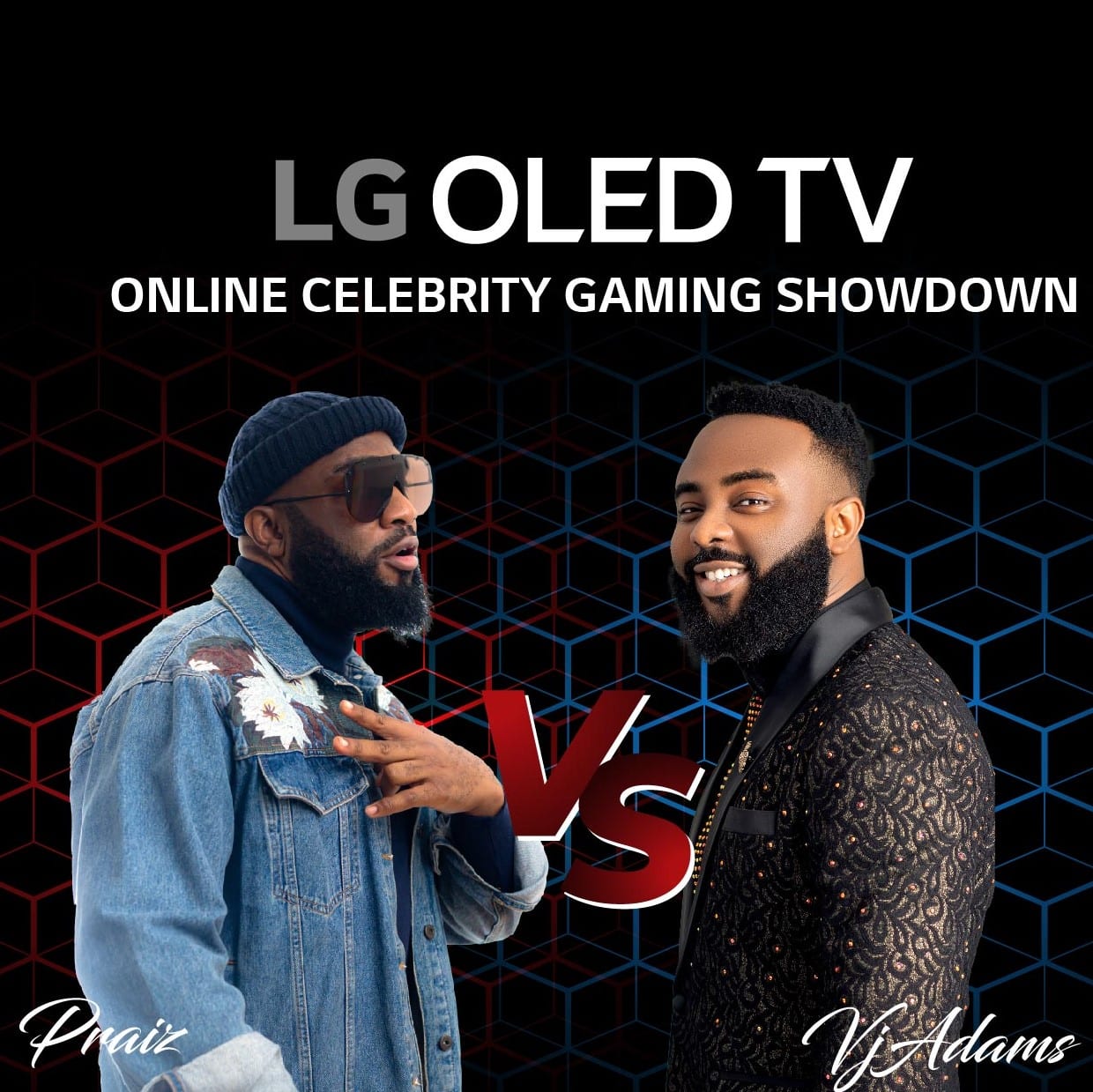 Prior to the event, contents were released on LG SNS handle as well as Praiz and VJ Adams handle to create awareness for the event.

Audience that connected to the live event were given opportunity to predict the winners of each round of matches to stand a chance to win LG LED TVs. LG representatives were on ground to respond to audience queries.

The recently held event is one of many experiential events of LG in Nigeria. Both celebrities were present during the Grand Finale of the LG OLED Gaming Challenge last year and have been keen followers of the LG brand.

Online Gaming is consistently gaining recognition and has become a global phenomenon with many brands doing their best to get in on the act.

He further stated that the industry is projected to reach $3 billion by 2025 and LG as a forward-looking brand is poise to leverage on this and position OLED TV as the best Gaming TV to its Nigerian audience through the LG OLED TV Online Celebrity Gaming.

The 20/21 championship is already on the way with games played in Lagos, Owerri, Port Harcourt and soon to be played in Warri while the grand finale will be held sometime in August.

We try to make a mix of both offline and online for our esteemed fans and customers alike to see the varieties of OLED TVs and what it has to offer in terms of design and extremely low input lag with an incredible 1ms response time. We also partnered with AMD to bring FreeSync Premium to LG OLED TVs.

Less flicker and low latency allow action-packed games to perform at their absolute peak with clear and fluid gameplay.6

“LG was the first to introduce transformative OLED technology to large screen TVs, and today, millions of LG OLED TVs have been sold. Experts worldwide have hailed LG OLED as the best TV technology ever, thanks to its unique self-lighting pixel.

LG OLED TVs are highly valued by many of the world’s top production studios and renowned creators for their exceptionally accurate color reproduction, and unsurpassed contrast.’’

LG Electronics took home the most CES awards ever at the 2021 all-digital event – a pivotal moment in history for the technology industry – earning more than 190 honors across its home appliance and entertainment categories.

This recognition was led by Engadget’s Best of CES Award (the official award program of CES) in the TV category to LG OLED for a seventh consecutive year; in 2021 the acclaimed LG C1 series OLED TV was singled out from the thousands of new TVs shown at CES 2021.

Only OLED features 8.3 million self-lit pixels that can be individually controlled, resulting in the deepest black levels, greater detail in darker areas, and rich colors for the most realistic picture quality.

For gaming and dynamic sports and movie content, the responsiveness and smoothness of the LG OLED viewing experience is unmatched. When it comes to immersive sports viewing, sound quality is just as important as image quality.

LG TV’s AI Sound Pro offers a dedicated mode for sports that lets you hear all the sounds of the game. Whether it’s the coach shouting orders, players directing their teammates, or the ball flying off the boot, bat or racket – you won’t miss a single sound.

Exemplifying LG’s commitment to outstanding design, the three new GX Gallery series models (55-, 65- and 77-inches) offer a uniquely minimalist aesthetic, made possible by OLED’s revolutionary panel technology which does not require a backlight.

This enables the television to integrate state-of-the-art picture quality in an ultra-thin form factor — the 65-inch model only 20mm thin without the need of a separate control box. The TV mounts flush to the wall akin to a piece of art in a gallery.

To guarantee a real 8K experience, LG’s TVs meet and exceed the industry definition for 8K Ultra HD TVs as defined by the Consumer Technology Association, making them among the first 8K models qualified to use the CTA 8K Ultra HD logo.